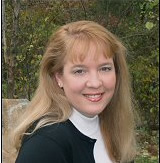 Since selling her first book to Harlequin in 1999, Leslie Kelly has quickly become known for writing sassy, sexy, and sometimes irreverent stories filled with strong heroines and playful heroes.

But when she set out to combine that sexy irreverence with her love of horror novels and scary movies, she really found her niche writing slightly twisted contemporary single title romances full of heat, humor and the occasional murder victim.

A National Reader’s Choice Award winning author, Leslie has twice been nominated for the highest award in romance, the RWA Rita Award, and is a six-time nominee for the RT Bookclub Award.

A former government worker in Maryland, Kelly now resides in Florida with her husband, three daughters, and a fuzzy little dog who hasn’t yet been informed she’s not a human.

Leslie loves to hear from readers and can be easily reached through her website: www.lesliekelly.com or at PO Box 410787, Melbourne, FL 32941-0787